Torture as a Means of Repression 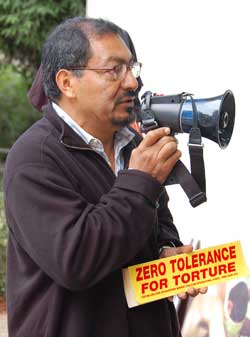 In 1983, Carlos Mauricio, a professor at the University of El Salvador, was abducted from his classroom by individuals dressed in civilian clothes who forced him into an unmarked vehicle. Mauricio was detained at the National Police headquarters in San Salvador for approximately a week and a half. During his first week in detention, he was tortured and interrogated in a clandestine torture center at the National Police headquarters as a suspected FMLN (Farabundo Marti National Liberation Front) commander. Mauricio’s captors at the National Police headquarters strung him up with his hands behind his back over his head and repeatedly hit him with a metal bar covered with rubber, inflicting injuries to his face and torso. During the first 2–3 days of detention, he was given no food to eat. He was denied use of a bathroom throughout his confinement in the torture center.

In 2002, Carlos Mauricio, along with two other torture victims, won a $54 million verdict against two retired Salvadoran generals. He has continued to speak out against torture and other human rights abuses. Revolution newspaper talked to him outside Boalt Hall Law School where he joined the protest against Professor Yoo.

Revolution: Can you tell me why you are out here today?

Carlos Mauricio: I am here because I am a torture survivor, so it is very important for me to come and tell people what happened in that horrible experience. I was captured by the Salvadoran army in 1983 and I was tortured for nine nights in a row. It was truly horrible. But the idea of coming here to protest John Yoo is precisely because the legalization of torture in the United States is coming with the idea of torturing U.S. citizens. Torture is carried out now openly abroad. The USA army has been torturing prisoners for many, many years. It was reported in Vietnam, so it is nothing new. But the idea of making torture legal in the United States—because the U.S. Constitution forbids it—is very important if the government wants to carry out torture of U.S. citizens. I am very concerned about that because I do believe the rights of U.S. citizens have been eroded by the administration. You see right now we have disappearances—they are called “extraordinary renditions.” We have clandestine cells being run by the CIA. We have the government of the USA torturing openly in Abu Ghraib and Guantanamo. So what is next? Next is here in the United States, openly torturing citizens of the United States. That is my concern. That’s why I want to denounce John Yoo.

I am here because I want to tell the story of what happened to me because I don’t want that story repeated in others. Torture is very, very horrible.

Revolution: Was there evidence that the U.S. was involved in your arrest and torture?

Revolution: What do you say to people like Bush who claim that torture is necessary to protect people in the U.S.?

Carlos Mauricio: No. No. No. The situation is this: The USA government, the administration, knows that fear works very well. Torture works very well as a means of repression. The USA government right now has played many cards to bring fears in the United States. One of them is the threat of terrorism, which can be real or not. The point is, torture is not for gathering information. Torture is to bring fear to the people. And the USA government wants to play that card, which so far has not been played in the United States. So the main idea of bringing torture is not for gathering information. Any person involved with intelligence says that torture does not work [as a means of gathering information]. In my particular case I confessed after being tortured horribly for eight nights. I said yes I did it, even though I didn’t do it, because I wanted them to stop torturing me. So the idea of torturing people is not to gather information—the idea of torturing people is to bring fear into the society. And now the U.S. and the Bush administration wants and needs to play that card in the United States.