Saturday, November 19. The Stop Mass Incarceration Network, along with Jamaica, Queens (New York City) community members and members of the clergy, anti-police brutality advocates, and students, and with the support of Occupy Wall Street, Occupy the Hood, and Occupy Queens, held a successful, peaceful civil disobedience protest at the 103rd Police Precinct in Jamaica yesterday afternoon. Eighty-five people stood in solidarity with the 20 demonstrators arrested during the nonviolent action, including Carl Dix of the Revolutionary Communist Party; Elaine Brower of World Can’t Wait; and several Columbia University students. Nineteen of the 20 arrested protesters were held overnight at Queens Central Booking and not released until the next day. The 20th, a young woman, remains in police custody as we go to press on November 21. 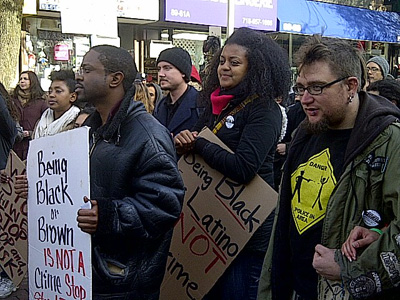 Beginning at 1 p.m., demonstrators rallied at King Park in Jamaica where local residents spoke about the repressive and harmful impact the NYPD policy of stop and frisk has had on their neighborhood. It was in the 103rd Precinct’s cachement area on November 25, 2006 that a group of undercover and plainclothes NYPD officers shot and killed the unarmed Sean Bell on the morning before his wedding. Two of Bell’s friends were severely wounded in the attack, which the city later described as a use of excessive force. As the demonstrators marched up Jamaica Avenue to the 103rd Precinct, many carried signs in memory of Sean Bell.

The November 19 rally is the third in a series of successful demonstrations in New York City neighborhoods that are heavily targeted by the NYPD for stop-and-frisk enforcement, a policy that the Center for Constitutional Rights and other groups have challenged as illegal.

Among the many arrested during the first two demonstrations are: Dr. Cornel West; Rev. Luis Barrios, professor at John Jay College for Criminal Justice; Carl Dix of the Revolutionary Communist Party; Randy Credico, social comedian/activist and former director of the William Kunstler Fund for Racial Justice; Margaret Ratner Kunstler, widow of the late William Moses Kunstler; and Gbenga Akinnagbe, the actor who portrayed Chris Partlow on the TV show The Wire. 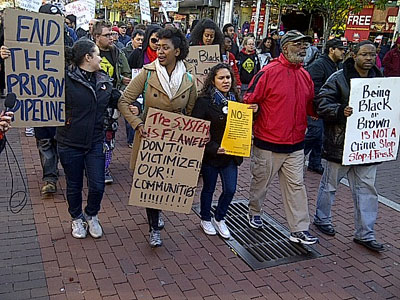 “The significance of what happened yesterday lies in the fact that something very important has been started with this campaign to STOP ‘Stop and Frisk’ and we faced a challenge of building on and broadening and deepening the momentum that had been created with the actions in Harlem and Brooklyn. In a basic sense, we achieved this.”

A contingent of students from Columbia University not only participated but said why they did—that the heart of this was recognizing that they are being prepared to be functionaries in the existing set-up and they are rejecting that because they see the set-up as racist and unjust and are siding with the community, by which they mean the oppressed communities of Black and Latino people. A couple of reverends from Queens participated in the march and rally, as well as the co-founders of the group Occupy the Hood, Malik Rashaan and Preach.

“This is part of the whole struggle against mass incarceration because stop and frisk is a major pipeline to prison,” Dix said. “In New York, they’re on pace to do 1,900 each and every day, five out of six Black or Latino, and more than 90 percent the cops can’t even find anything to arrest them on. Stop and frisk is one aspect of a world that is a horror for the majority of people—all over the world. And as a communist, I am fighting this horror as part of building a movement for revolution, a movement that can get at the system that enforces this as part of enforcing a status quo of extreme inequality.”