Recently, two college students (young women) insisted to me that it was wrong to oppose pornography because we should be "sex-positive." They also insisted that many women choose to go into pornography out of their own ambitions and that ought to be respected as a means of "empowerment."

I described, among other things, some of what Sasha describes about herself in the video below—how she invited a man to punch her in the stomach during oral sex as one of the ways that she won such favor in the porn industry, for instance. The young women hesitated for a moment, but then one of them insisted that if this was her choice we should respect it. "But, what of the content? What of the view of women and sex that is being promoted through this?" I asked them. At this point, they insisted they were out of time and had to go (interesting, as they had stopped on the street and talked at great length and with no seeming hurry for quite some time).

But for that fraction of women in the industry like Sasha Grey who choose to be demeaned, degraded, abused, and much more (including films that portray them as small girls, ass-to-mouth scenes, gang-bangs with up to fifteen guys on her at once, scenes where she licks a toilet bowl and worse), the critical question is NOT whether she chose to do those things or not. The key question is the social effect of those actions—and of broadcasting those actions to millions of viewers.

When someone kills someone else, we don't ask the question, "Did they really feel it in their hearts? Was their choice 'authentic' to them?" We ask first, "What was the social effect?" And, if there is not a very good reason for them to have killed (i.e., some situations of self-defense or in certain situations within the context of a just war) their behavior is condemned for its effect on society. Further, such behavior—wherever possible—is stopped.

There are various strands of feminist thought on these positions and Sunsara Taylor has taken the "hard-line" anti-porn position. The problem is that this position internalizes the Puritanical and sexist cultural attitudes that stifle women's sexuality ...

Sex by and of itself is a pure concept (it has no meaning of its own). Therefore the significance and values we place on it are contingent upon a number of things, first and foremost are the signs and values ascribed to it by any human society.

As a pure concept the signs and values that we give to human sex will be purely a reflection of the society that produces them. To briefly illustrate this: the representation of two humans engaged in coitus carved in a temple complex from some ancient society will have had very different meanings to that ancient society than the same representation does today in western civilization. Therein lies the rub.

When the Europeans invaded this continent (América—is a single continent), it was part of their policy to rape as many indigenous women as possible, this accomplished many strategic things which I won't get into here. But the point is that sex in western civilization has been and continues to be used as a barbaric weapon of exploitation, expoliation and domination.

Commenter 1, you write, in part:

"Any serious person must first acknowledge that there is a sexual aesthetic and that women have just as much a right as do men to be liberated sexual beings and to express their sexuality in healthy ways."

Commenter 2—what you say is very deep and much appreciated.

One of the obvious difficulties in discussing pornography is the problem of definition. It is near impossible to define pornography, and SCOTUS (Supreme Court of the United States) is a prime example of this. The Supreme Court has found it near impossible to define pornography, from stating that it is that which is "utterly without social redeeming value" to Justice Potter Stewart's "I know it when I see it" statement. Who is the arbiter of what is of social redeeming value and how do they decide? If we follow Stewart then we are forced to agree that it is a merely subjective judgment and that there can be found no objective criteria...

The notion that there must be deep philosophical or political or social discussions in art, or in anything else for that matter, to be of aesthetic and artistic value is quite objectionable. The WSWS (World Socialist Web Site) covers world political developments well and in a general sense is correct—I obviously have personal, political differences with them, as I do [with] you—but their film reviews are constantly obtuse and strict [in] the most absurd sectarian ways. The WSWS is of the opinion that unless a near completely socialist ideology is infused into the storyline of every film then the film necessarily lacks artistic merit. Nothing could be more absurd. There is the position of art for art's sake. Film doesn't have to be sociopolitical. It can be driven by the purely emotional or even the pure aesthetic of cinema or both. In this sense pornography (whatever it is) does not have to dwell upon philosophy or politics or sociology. It's an absurd claim to argue otherwise. Although one could argue, as many have, that Bertolucci's The Dreamers or Cuarón's Y Tu Mamá También are both exactly that: pornography with cinematic, sociopolitical discussions in the background. Who is to decide?

"Empowerment." Wow that's just crazy, and that is such bull shit. I was a prostitute for 18 years. And there is no such thing as getting "empowerment" from that. Even for males, there is no empowerment. It's straight exploitation pure and simple. And in that business women have it much worse. Everyone's getting exploited, but the women are at the bottom. It's sickening really. I've been there, in the same room where the filming is taking place. And it's nothing glamorous what so ever....

I dislike turning such discussions into personal commentaries but because of your ad hominem I suppose I should point out that I am more than capable of imagining sex without porn. For me, sexual relations are all about the conjoining of equal partners in sexual acts mutually desired. Although I strongly believe in personal freedom and liberty, even the freedom to engage in weird sexual fetishes (some people legitimately enjoy such things, perhaps Sasha Grey is an example, although, again, I don't know enough about her situation to know), I myself am fairly conventional. I am of the personal belief that sexual relations should be the tangible manifestations of love. I am more of a romantic really. That simply has nothing to do with the real arguments here...

Commenter 3, you write, in part:

First, I agree that the damage is also done to the prostituted woman. I was not arguing over where the harm is greater. I was making the point that for the vast majority of women in prostitution and in porn, they are in terrible and damaging circumstances they would get out of in a second if they had a viable option to do so. However, even for those who uphold what they are doing and choose to do so, that alone doesn't settle the question as to whether that is a good thing to choose to do. That is why I bring up the societal damage. The two, in fact, are linked.

Nowhere have I insisted that every film have a political message or political discussion. Your description of the narrowness towards art on the WSWS is rank economism, extremely harmful, and is totally different than the point I was making. Contrary to the insistence that EVERY film include politics, I was pointing to a problem with a genre that on principle NEVER includes women as full human beings, including their ideas and thinking on matters of philosophy, art, politics or whatever else.

To use an analogy: does the fact that a woman such as Margaret Thatcher was in charge of Britain prove that patriarchy no longer exists? Just because you change the gender or the race of the person now in charge doesn't change the underlying form of oppression. 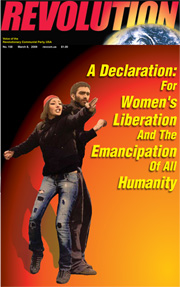 This Declaration exposes the oppression of women in class society, and goes beyond that to develop and deepen existing communist theory and theoretical analysis dealing with where this oppression comes from, why it exists, and what we have to do to get rid of it and all oppression as we emancipate all humanity. It lays bare all the paltry programs and moral and ideological bankruptcy of those who claim the mantle of women’s advance but only mean getting a “fair share” in the world as it is. It presents a vision of what socialism and communism could be like, building on and going beyond experience in socialist societies so far.

Special issue of Revolution #158
$1 plus $0.50 shipping.
Order from RCP Publications
or online at revcom.us