This information is from The World Can’t Wait:

Saturday, February 4
Day of Mass Action to Stop a U.S. War on Iran
NO war! NO sanctions! NO intervention! NO assassinations! 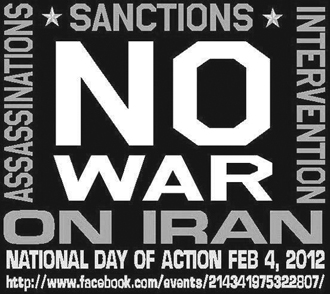 In many ways, U.S. war on Iran has already begun.

The United States and Israel, both of which have nuclear weapons, say they will stop at nothing to keep Iran from having a nuclear program, even though the U.S. Secretary of Defense says Iran won’t have nuclear capability anytime soon.

The U.S. has begun harsh economic sanctions that can destroy the Iranian economy and the lives of millions of Iranians through depriving them of food, medicine and electricity. Either the U.S. or Israel is killing Iranian scientists in car bombings. U.S. surveillance drones are flying over Iran, in violation of its sovereignty. Three U.S. carrier groups are off Iran, and secret U.S. commando operations are going on inside Iran.

Will we allow another U.S. war based on lies?

Iraq is devastated from decades of U.S. military intervention and sanctions that took the lives of hundreds of thousands of children, and led to 4.5 million people being driven from their homes. Afghanistan, the poorest country in the world, is being destroyed by the richest.

Let the whole world see that we will not let the U.S. rain death, destruction and devastation onto yet another country and further inflame a dire situation in the Middle East. One thing we know is that when people stand up together to resist the crimes of their government, like the courageous protesters of the Arab Spring and the Occupy movement, something beautiful can emerge.

There are actions in 27 U.S. cities, Vancouver, Calcutta, Dacca, and at Shannon Air Force Base, Ireland, planned by dozens of organizations.

Go to worldcantwait.net for more information, including a list of endorsers and to find or organize local protests.