"This has to stop, this cannot go on"

On June 11, NYPD cop Richard Haste was indicted on manslaughter charges for the fatal shooting of 18-year-old Ramarley Graham.

The night of February 2, 2012, like so many Black youth before him, Ramarley Graham was cut down by a cop who had a story to justify the murder before Ramarley's family even knew he was dead.

Narcotics detectives barge into a home in the Bronx. They gotta come up with something to explain shooting a young kid, close range, dead, in the bathroom. First they say Graham ran into the building fleeing from the officers. But there's a problem. Surveillance cameras show Graham walking to his apartment, taking out his keys, opening up the door, and casually walking in. New York Police Commissioner Ray Kelly at first says Graham "appeared to be armed." But this presents another problem for the police—because no weapon was ever recovered. They didn't have a warrant. But they kick down the door. Enter, guns drawn. In a matter of seconds, a death sentence is carried out—for no reason other than being young and Black and therefore, in the eyes of the police, suspicious.

The completely outrageous nature of this murder: chasing someone into their own home, busting through their front door, going into their bathroom and shooting them point blank... and then making up a whole story about how Ramarley was runnning into the building and was armed, all of which was clearly shown to be a complete lie. All this has hit people hard – and bitter anger has expressed itself in ongoing protest. Hundreds came to the funeral. Up to 200 people have come to demonstrations outside the the 47th NYPD precinct. People show up with t-shirts that say, “U C MY HANDS – NO GUN – Please don’t shoot” and signs declaring, “I am Ramarley Graham.”

Outside the home where Ramarley Graham was killed, a vigil is being held every Thursday (the day he was killed) for 18 weeks—to represent the 18 short years Graham lived. Leona Virgo, Ramarley's older sister, said on Democracy Now! (June 19), "At the end of the day, even though he's gone, it could happen to someone else. And all we're trying to do is prevent that from happening and to shed light on this situation here, because it does occur every day, and sometimes the stories do get unheard. But we're not going to let that happen in our situation, because they want us to forget, but we're not going to forget."

When Royce Russell, the lawyer for the Graham family, was asked if Ramarley had had problems being stopped by the police he said, "From those that you ask, 'Have you ever been stopped and frisked before?' it's probably highly unusual that you can grow up in New York City, African American or Latino, and walk the face of this earth, to and from school, in Bronx County, Kings County, Queens, Manhattan, and not be a subject of a stop-and-frisk, which we all know that doesn't mean you were doing something wrong, but be subject to a stop-and-frisk. I wish Ramarley was here to maybe tell us the stories of when he was stopped and frisked, if he was stopped and frisked, because we know oftentimes that many kids don't even reveal that to their parents. It's become such the norm that they don't even come home and say, 'Hey, Ma, you know what? Today a police officer pulled me over and went through my bag.' It is a norm." (Democracy Now!, June 19)

THIS IS WHY WE CALL THEM PIGS! 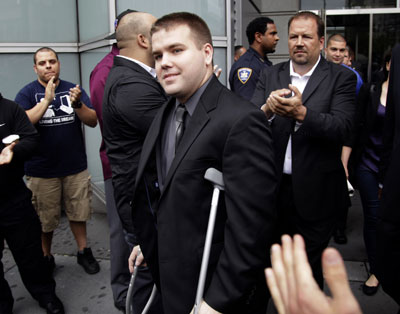 On February 2, 2012, NYPD cop Richard Haste shot 18-year-old Ramarley Graham in the face at close range, killing Graham in his own bathroom. Here, Haste walks out of the courtroom on June 13 after turning himself in to face manslaughter charges for the killing—and is applauded by his fellow cops and supporters. Photo: AP

Richard Haste, the cop who stole Ramarley Graham's life, pleaded not guilty and was released after posting $50,000 bail. This is the first time an NYPD cop has been indicted on a charge stemming from an on-duty shooting since 2007 when three detectives were charged with the murder of Sean Bell. Those officers were later acquitted.

In December 2007, another officer, Rafael Lora, was indicted for an off-duty shooting in the Bronx that killed the driver of a minivan. He was tried and found guilty of manslaughter—a conviction then overturned by an appeals court. And in 2000, the four police officers who shot and killed Amadou Diallo in the Bronx—in a hail of 41 bullets—were acquitted.

This is all part of a slow genocide by this system—that can become a fast genocide: Mass incarceration where nearly 2.4 million people live behind bars; with 80,000 subjected to the most inhumane, conditions of torture in solitary confinement. Official illegitimate policies like stop-and-frisk, that institutionalize racial profiling—and serve as a major pipeline to the prisons. And the endless brutality and chain of lives stolen by cops, like the lives of Ramarley Graham... Sean Bell.... Amadou Diallo... Oscar Grant... and so many others in the past... and to come in the future—as long as this system is in effect.

Ramarley Graham's grandmother, Gwendolyn Henry, was there the opening day of the trial of 20 defendants arrested in Harlem for civil disobedience to STOP "Stop & Frisk." She told Revolution newspaper: "The reason I'm here is because of the injustice that is going on with our young Black and Latino children. This stop-and-frisk is nothing but something that has been planned to destroy our young children. And I am here to speak up about it because we are too silent. It has been going on for too long, too long. So we have to start and make a movement, this has to stop, this cannot go on."