Get Ready to Kick Off the BAsics Bus Tour!

“[Bob Avakian] is opening our understanding to the way it is, where other people are afraid to speak because it’ll put their life on the line, and this man put his life on the line for everybody to know the truth. And he just told it just how it is. How can we make that change if we don’t know the basics?”

—Virginia, woman in Sanford, Florida,
who was introduced to BAsics
during the bus tour through the South

A new movement is being forged—bringing something radically new onto the scene—and this can take a big leap through the next leg of the BAsics Bus Tour kicking off in mid-July. The pilot project of the bus tour rolled through California in February, followed by the tour through the South in May. Building on this, the tour now hits New York City and surrounding areas. 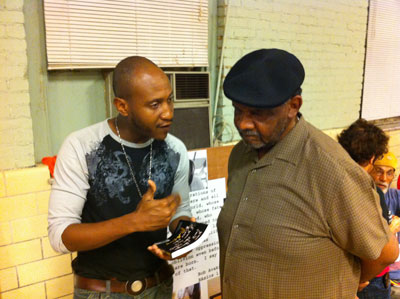 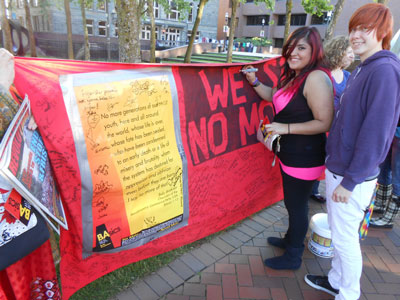 The tour is part of the mass campaign to raise big money to project Bob Avakian’s vision and works into every corner of society: BA Everywhere... Imagine the Difference It Could Make! This leg of the tour will spend time in the global financial center of imperialism—New York—a city where incredible wealth and opulence exists side by side with neighborhoods that have been abandoned and left to rot by this system. And it will go to other cities in the region—where there are also apartheid-like conditions of the New Jim Crow, and where there are people from all over the world, many forced to come to this country because, to paraphrase BA, U.S. imperialism has fucked up their homelands even worse than what it has done to the people here. The tour will reach out especially to the youth with no future under this system.

Volunteers of different nationalities, ages, and life experiences will bring to the people word of Bob Avakian and the new synthesis of communism he’s brought forward, the strategy for revolution he’s developed, and the leadership he’s providing for the movement for revolution. The volunteer crew will be connecting people broadly with the two BAsics quotes for July (see poster in this issue), as well as continuing to reach out with BAsics 1:13.

Let’s get many copies of BAsics into the hands of people where the tour is going, and all across the country, and have all kinds of showings of BA’s talk Revolution: Why It’s Necessary, Why It’s Possible, What It’s All About. The volunteers will be working to leave behind cores of people, organized to be part of the movement for revolution in beginning ways. The tour will be a catalyst for mobilizing people across the country—to follow and support the tour, and to organize and bring more into the whole BA Everywhere campaign in many different ways.

To Make This Tour Happen...

This is going to take LOTS of money. $25,000 needs to be raised by the July 6-8 weekend, and $50,000 overall by August 1. This is a huge need—but also a great OPPORTUNITY to reach out even further and more broadly to many new people... to all those who are concerned about the state of the world and where things are heading, and to involve many more people in all kinds of ways (see “What You Can Do NOW” on this page).

Whether you’re someone who has recently learned about the bus tour and the whole movement for revolution, or you’ve been involved for a while, Revolution calls on you to go out to others—talk to people one-on-one or organize various gatherings and get the word out about the tour (and raise money!), using the organizing materials available at basicsbustour.tumblr.com and revcom.us.

When you donate to and take part in other ways in this tour, you are joining with many others across the country like yourself who are outraged at the way things are and feel suffocated at the level of discussion in society, who have been inspired and moved by Bob Avakian and the vision and strategy he’s developed for a radically different—and far better—way the world could be. You are joining with others in a movement across the country—acting as individuals, there is no way we can change the horrors confronting humanity, but with leadership, and acting together with thousands of others, even small things we do can be part of having meaningful impact on the whole political and ideological terrain throughout the country. Join the thousands today who are part of influencing millions with a revolutionary message... and preparing to lead those millions toward revolution when conditions emerge to do so.

As of the end of June, $8,500 was raised—through people coming together for fundraising picnics, stoop sales, and other efforts, and through individual contributions. $16,500 more is needed by July 8 to reach the $25,000 figure.

As part of this crucial weekend of fundraising, a new video will be released online on Friday, July 6. Join with others across the country to get together with people in various gatherings—house parties, salons, community centers, one-on-one meetings, etc.—to watch the video and raise funds for the tour. And the activities that weekend can be a springboard to raise the rest of the goal for this bus tour and get donations for BA Everywhere, and to bring many more people into the campaign.

These plans taken together—including, very importantly, documenting what has been done for posting at basicsbustour.tumblr.com and for Revolution—can go a long way in radically changing what people, here and around the world, think is necessary and possible, and bring them into the process of changing the world. July can mark a leap in BA’s voice getting out into society even further. You are needed to make this happen... your contributions and ideas, your energy and creativity, your questions and participation.