In Memory of Comrade Azar

The world has lost a precious and fierce fighter for the cause of the emancipation of all humanity. On May 26, Azar Derakhshan, a prominent member of the Communist Party of Iran (M-L-M) lost her 11-year battle with cancer and died at the age of 53. Hundreds of people from all over Europe gathered at the Père Lachaise cemetery in Paris for her funeral and marched to the Wall of the Communards where the last fighters of the Paris Commune were executed. 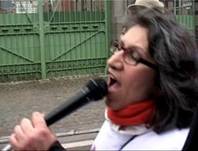 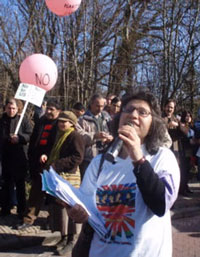 She joined the Union of Iranian Communists in 1979 when the revolutionary upsurge in Iran was at its height. In 1981 the Sarbedaran uprising in Iran suffered defeat at the hands of the Islamic Republic which had established power and killed, imprisoned and tortured communists by the hundreds. In the mid-’80s Azar left Iran with her two small children and went to live in exile in Europe.

In the face of the defeat of the revolutionary uprising in Iran, and coming in the wake of world-historic setbacks with the loss of socialism in China, communists faced the difficult task of summing up this historical experience, confronting the questions posed by these defeats and going forward on that basis. While there was much turmoil and disorientation in the ranks of the communists in this period, Azar was among the comrades who kept her bearings, fought to uphold past achievements and to rupture with incorrect ideas that hold back the struggle. She was tempered and strengthened through this whole process, recognizing that advance was not possible without providing answers to past defeats.

In a statement about Azar’s life, the CPI(M-L-M) spoke about the breadth of her vision and heart:

She saw herself as belonging to all parts of the world. Her heart beat with every struggle against oppression and injustice in any corner of the world, from Palestine, India, Bangladesh and Nepal to Peru, Colombia and the United States. She carefully followed the theoretical debates in the international communist movement. She eagerly devoured the theoretical leaps in scientific communism. Every understanding that had the power to explain the problems brought her immense joy. She was open to any theory that could explain problems more correctly.

Starting in 1998, Azar played a central role in the efforts to forge a revolutionary pole within the women’s movement in Iran, developing the 8 March Women’s Organization and becoming a well-known spokesperson for the struggle against the brutal oppression of women in Iran.

Mary Lou Greenberg of the Revolutionary Communist Party, USA, in a statement in honor of Azar’s life, recalled her experience in working with Azar in March 2006 in the Great March Against Anti-Woman Laws in Iran where Iranian and Afghan women and their supporters rallied and marched in several European cities. She recalled Azar’s defiant words at the embassy gates of the Islamic Republic of Iran in the Hague:

“For 27 years we have been talking about the criminal things you’ve done. Today, we have news for you. A united and organized force is being born. When you took power, you celebrated by attacking these people. But these newly birthed forces will put the nails in the coffin of the Islamic Republic of Iran.”

Mary Lou Greenberg went on to speak about some of Azar’s great strengths:

She had nothing but contempt for the theocratic Islamic Republic, for U.S. imperialism and for patriarchy in all its hideous forms, based on a great certitude in the absolute necessity and possibility of bringing about a fundamentally different society and world. While scorning the enemy, Azar exuded warmth toward the people, especially women, including those who disagreed with her—but she also struggled forcefully with passion and science against incorrect ideas and fought to understand more deeply the oppression of women and its relation to transforming the world.

While Azar was a tireless activist and fighter against oppression she also understood deeply the decisive role of communist theory—of developing a scientific understanding of the source of oppression and the pathway to emancipation through the communist revolution. The CPI(M-L-M) recalled the passion with which she studied and propagated communist theory:

She used to say that others may think that these theories belong to us, but they belong to everybody. When something is true it cannot remain in the hands of one party or group alone. These truths are for saving and fortifying a movement without which there can be no emancipation from oppression and exploitation.

And she fought particularly for other women comrades to develop their capacities in studying communist theory, in grappling with ideas so that through this they would be able to distinguish between false and correct paths.

The following words from the CPI(M-L-M)’s statement speak powerfully to the impact and legacy of Azar’s life:

Which of these qualities most define Azar? Rebelliousness, consciousness and understanding, uncompromising opposition to old ideas and traditions, immense energy, perseverance, hard work in making the impossible happen.

Azar was a communist. She was a communist in a period where the death of communism has been declared over and over again. She considered herself a full-time activist on this road. She fought with all of her being to bring forth a new generation of revolutionary communists. Her message to the new generation was this: Absorb the experience of the past generation, stand on our shoulders in order to see the far away horizons, envision it much better than we have and conquer new heights. At the sight of the young people who got her message, her eyes would sparkle.

When oppressed people produce someone like Azar, they in fact come to believe in their own capacity to change the world. Azars become a role model for struggle. They become a powerful proclamation against the world’s dominant reactionary social systems. A new sense of confidence sprouts in their hearts, that we can and must bring down the oppressive and exploitative system and create a new world.

Azar fought with great passion to the very end of her life to contribute all she could and to lead others in the fight to end the nightmare of the rule of capitalism-imperialism over the world’s people in all its hideous forms—and to bring closer the future of a communist world beyond exploitation and oppression where humanity can at last be truly free.

To all who dare to dream of the possibility of a whole new communist world: step forward to take up the vision and the cause Azar devoted her life to fighting for, and fight to advance the struggle to make this dream a reality for the people of the world.