Every Tuesday two dozen national security officials meet in the White House Situation Room to add new names to the “kill list.” They study, discuss, and decide who among the fresh crop of candidates from various parts of the world will be chosen for assassination. They look over the “baseball cards,” as one official calls them—faces on one side and biographies on the other. And yes, U.S. citizens are on the list as well.1 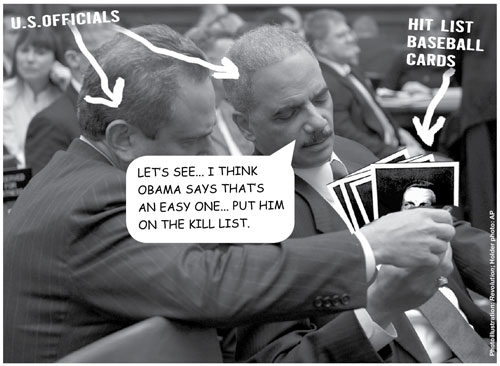 President Obama personally oversees the process. He insists that he alone is to make the decision of who will be the next target of a drone attack or some other lethal kill. Apparently his decision to kill the American-born cleric Anwar al-Awlaki in Yemen was “an easy one.”

There is no trial, no jury, no challenge to the evidence presented. But Attorney General Holder explained in a speech at Northwestern University in March that it’s not a violation of constitutional “due process” because what takes place in that room embodies due process.

The so-called “precision” drone strikes used to kill the targets are also killing many others who happen to be in the area. So the numbers are intentionally lied about by the CIA, which claims any military-age male in a strike zone is a combatant unless there is specific intelligence posthumously—after they’re dead—proving them innocent.

What takes place every Tuesday is macabre and an extremely dangerous development. It is also a fundamental violation of U.S. and international law that goes beyond anything that Bush did. These are military strikes on the territory of other countries without any prior act of war by that country against the U.S., without any declaration of war issued by Congress, far from any war zone.

The president of the United States believes that he has the power to order people killed, assassinated, in total secrecy, without any due process, without transparency or oversight of any kind…It’s literally the most radical power that a government and a president can seize, and yet the Obama administration has seized this power and exercised it aggressively with very little controversy.

Why? They’ve come to agreement that this is a necessary part of the president’s job at the helm of a capitalist-imperialist empire facing serious, new international challenges.

In an article in Foreign Policy magazine in May 2012 titled “Barack O’Romney,” Aaron David Miller—who worked in the U.S. Department of State for 24 years and was an advisor to six secretaries of state—writes, “Ignore what the candidates say they’ll do differently on foreign policy. They’re basically the same man.” And after Obama’s order to kill Awlaki was carried out, Dick Cheney, Bush’s Secretary of Defense, praised Obama for “a very good strike,” calling it “justified.”

The ruling class that sits atop this imperialist system has no solution for the horrendous consequences of the workings of their system that is in any way in the interests of the people of the world. Rather, the urgency they confront is the “smart” use of military aggression and political intrigue to maintain, or reassert, their domination of the Middle East and Central Asia, fundamentally against the people of those regions. Obama’s “kill list” from that perspective is, as he put it, “an easy one.”

This is the Imperialist System

This is What They Want You to Vote For