Cornel West and Carl Dix: "Blow the Whistle on Stop-and-Frisk on September 13"

On August 29, Cornel West, Carl Dix, and others held a press conference to announce a new and more widespread wave of public protest to begin September 13 where, according to Dix, "People armed with whistles and cameras are going to search out and politically confront police who are violating people's rights, delivering the strong message that 'Today, no one will be subjected to this abuse in silence.'"

The press release put out by the Stop Mass Incarceration Network said, "Horrible crimes are being perpetrated throughout New York City. These crimes are being masterminded from NYPD headquarters" and the press conference was held at "the scene of the crime," at 1 Police Plaza—where the orders actually go out for stop and frisk.

Speakers included Carl Dix, from the Revolutionary Communist Party and Dr. Cornel West, who was convicted of disorderly conduct on May 4, along with Dix and 18 others, for blocking the entrance to the 28th Precinct in Harlem to protest stop-and-frisk in October.

Another speaker was "Noche" Diaz, a young man arrested at that same action, but not involved in the civil disobedience. "Noche" Diaz is to be tried on Wednesday, September 5, in Manhattan Criminal Court on charges he obstructed police as they tried to arrest another protester, though that person was never identified nor arrested. Prosecutors are trying Diaz, an organizer with the Blow the Whistle campaign, at the same time for similar charges in March 2012, in what supporters call a "prejudicial" prosecution. 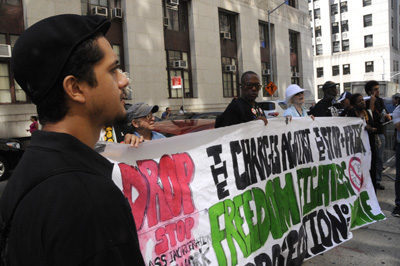 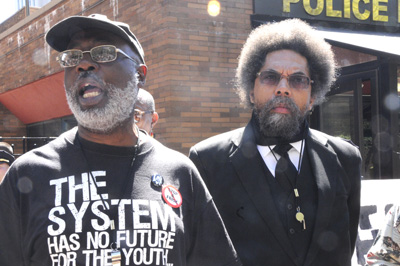 After the press conference, Diaz' supporters marched to Manhattan District Attorney Cyrus Vance's office to deliver hundreds of letters demanding that he drop the charges against Diaz, who faces years in jail on multiple misdemeanor charges, and against 19 other protesters who still face trial in Brooklyn and Queens. Organizers say that, rather than facing jail time for protesting an "unconstitutional, illegal, and racist practice, these new freedom fighters should get medals."

The following are transcripts of statements given at the press conference:

When these whistles blow people are gonna turn their heads, windows are gonna open, people are gonna come out of their houses, they're gonna ask what's up. People are gonna tell them we're doing this because we refuse to suffer any longer in silence the abuse from the police and the whole criminal injustice system. And then coming off of September 13, there's gonna be a whole different level of resistance. People are gonna stop suffering all this in silence, stop accepting it that way. On October 22, the National Day of Protest to Stop Police Brutality, people are gonna be out at the prisons, calling out the slow genocide that comes down on Black people. 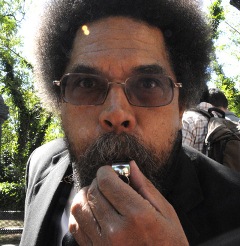 It's always a joy to stand next to my dear brother Carl Dix. Nine months ago he and I called for a mass movement to end stop-and-frisk because it is wrong, it is immoral, it is racist and unconstitutional and because we wanted to take a stand publicly, to go to jail, to have a trial, to have a verdict, in the name of what?, in the name of justice, in the name of fairness, that each life is precious, I don't care what color, I don't care what culture and when it comes to the weak and vulnerable, especially our precious young people, who are disproportionately targeted, and Black and Brown young people, disproportionately targeted, we will take a stand. 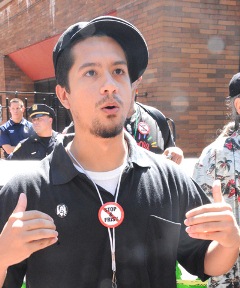 Some of you out there have never been stopped and frisked, and maybe you don't know what it actually means what it means to be a young person coming up in New York City or maybe you know some people and you've heard these stories. But people need to actually know what happens every day, 1,900 times or more. Maybe you're coming home from school, maybe you're going to school, maybe you're going to work, or coming home. You're minding your own business, you're going about your day and suddenly some cop steps to you. They grab you, they throw you up against the wall, they turn out your pockets and if you speak back you risk being thrown in jail and spending the whole night locked up and facing charges and a case, maybe having to miss school, or maybe having to miss work which you can't afford to do. And your whole life begins to be dominated by the fact that at any moment when you walk the street, some cop can step to you and mess up your whole day, your whole week and the rest of your life.

More than this, why is it that I have to look at these 15-year-olds in the playgrounds in the Bronx who tell me that if you're not a white person in this world you don't matter and you don't mean anything? Why do I have to talk to a 16-year-old, who for a year had to walk around with a restraining order to keep the cops off his back because by the time he was 15 he had been stopped and harassed so many times he couldn't leave his house without his mother fearing for his life and he had to go to a court and have a judge issue an order to keep these cops off his back. And now that he's 16, he no longer has this piece of paper and he's afraid to walk out and hang out with his friends.

What kind of society is this? What kind of world are these youth growing up in? And how come you never hear that story every time they talk about these youth who devalue themselves and carry out violence against each other that the mayor loves to point to after the fact, when he knows and he lies anyway and he knows this stop-and-frisk policy does nothing to stop—that he cares nothing about these youth and these lives that are lost and these generations who are condemned to an early death or a life of brutality and imprisonment. On September 13, that is not going to go down anymore where people are isolated, where people just feel like this is just happening to them, and that something is wrong with them for being stepped to, for being harassed, for being dehumanized, for having their basic rights taken from them and violated. No more in silence and no more at all. On September 13, we're elevating the level of resistance to actually put another nail in this coffin of stop-and-frisk, like my brothers Cornel West and Carl Dix have been saying, we don't want to mend it we want to end it. Like Carl Dix has said over and over again, the Freedom Riders didn't want extra seats in the back of the bus, they wanted an end to Jim Crow segregation. And we want an end to the new Jim Crow of mass incarceration.

Like people have said, I’m facing trials all over the city. On September 5, I’m on trial in Manhattan, facing up to four years in prison, precisely because when these kind of things go down I don’t walk by and I don’t let it happen in silence, I don’t let people get violated without someone speaking up for them. [Noche’s trial has now been continued until October—Revolution.] I’ve been standing up for these youth for years. And I’ve been targeted for my role in doing that. But what’s important for you to know is that you can actually be a part of beating back these attacks on people who stand up for the people and for the youth. And so I invite everybody to join us on September 13 and join me in court on September 5.