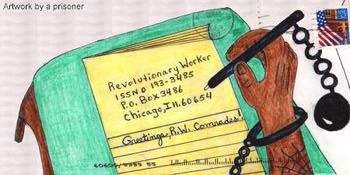 Shine the Light of Revolution Behind the Prison Walls

Each month we receive dozens of letters from prisoners all over the country requesting subsidized subscriptions to the Revolutionary Worker/Obrero Revolucionario. The following excerpts from letters written by prisoners show the importance of shining the light of revolution behind the prison walls. We are calling on people to make an extra effort at this time of year to contribute to the Prisoners Revolutionary Literature Fund, so that not one request will go unfulfilled.

Your papers are a very big inspiration for me to stay strong. Word! I like your papers, I really do. Don't ever stop sending them to me, please. They're the bomb!

Are you able to renew my RW subscription? If so, please do. And I do share the newspaper with any other prisoner who is interested in reading it. We definitely need to have a newspaper as yours to be informed the truth of what be going on and not what the established media and its government wants us to believe. And we even more need to have your paper to be informed news that the established media and its government blacks out from the people's knowledge. Such as the revelation that the Georgia Bureau of Investigation had total proof that the KKK committed most of the Atlanta child killings, yet the GBI covered this up and put all the killings on a Black man who they convicted for life(s).

And the Ronald Reagan election victory being because of his deal with the Iranian government to discredit Carter by holding the hostages until after the election.

With what the true scoop you give and sometimes the only scoop given (heard or read nowhere else) your paper is a valuable source of knowledge that keeps us aware that in sum this government is corrupt, manipulates its people, exploits its people and other people, and its first and only concerns and agenda are looking out for the best interest of the most wealthy--the ruling class. . . .

I am presently in the Texas Department of Criminal Injustice Institutional Division. I was receiving the RW but my subscription expired on my last issue. These people have my account closed because they wish for me to pay for some damages that resulted from a riot. Believe me, if I had the means to afford the sub- scription price I would pay for it. I am asking if possible I may be placed back on your mailing list?

I am being kept in Ad Seg, a Control Unit as they call it, since 1995. I share the issues with all my brothers in Ad Seg. On other times they get sent to other sections of this unit to other brothers.

Being placed on your mailing list will help me keep up to date on the outcome of our Brother Mumia and the movement of his court. I have enjoyed the issues of the RW and the subjects of our struggles against those who wish to keep our goals from succeeding.

I do understand that there is a tremendous cost for printing and mailing costs. But I ask of those please to place me on the mailing list in order to receive the RW. I ask you in charge to do this for an indigent inmate.

My name is XXX. [About 14 months ago] I was beaten by seven officers in the Ad Seg unit office behind closed doors while I was lying on the office floor handcuffed behind my back and ankle chains on my ankles while I was on my stomach. I was given a bogus charge for "leading a racial disturbance and inciting" to cover up why they actually had me in the office, which was because they were mistreating another brother badly and I told them that they didn't have to treat him the way they were because the brother wasn't hostile, resisting or anything. The sergeant told me to "get the fuck off the door" and I feeling disrespected by her language towards me replied, "Fuck no, your officers don't have to do him like that and that I am a witness." A minute later they took me to the office and beat me, tortured me, made verbal insults to me against my Afrikan heritage and forcibly cut all my clothing off of me and destroyed them due to they were evidence and had my blood on them. They had me in the office for over an hour and they wrote up bogus paperwork claiming they had a confidential informant.

In the process of their mistreatment of me a officer injured himself and claimed that he had a separated shoulder and that I assaulted him so they gave me a bogus "battery on a peace officer with serious bodily injury," and a D.A. referral which the D.A. filed on me and tried me on three strikes (25 years to life). These correctional officers tried to take my whole life from me to cover their asses. I must say that [over a year later] the jury acquitted me of all charges.

As far as I am concerned, justice has only partly been served. I have filed a $30 million civil suit on them. The handcuffs they placed on me was exceedingly too tight. I'm asking for six officers to be terminated from their duties and ever working for the Department of Correc- tions, pay a $1,000 fine and a 5-year imprisonment.

Will you please tell the Afrikan brothers and sisters and the Brown brothers and sisters that law enforcement brutality cases don't only happen on the streets but in prison as well and that prisoners and their families may make a stand and take action. File complaints and file civil suits. Don't be scared! Make them stop! We must all resist!!!

I want to know about being a revolutionary worker. What can I do from in here to help the people? I pray that you all write back because it's time to make that change.

A guy here gave me an issue of the RW to read.... It was the issue on the National Day of Protest. The piece about voting was very perceptive. It can be printed in every issue for a year or two so that people are fully conscious about what is really going on. I had a conversation about that very same subject with a friend a few months back on the outside rec. yard...

I am sure that you know the administration frowns on people having intelligence. They expect all inmates to be submissive to the authoritative or so-called authoritative position. I do wish that I could tell you all that I know but I am not allowed to seal my own letters so you know what that means. I wish that you would do a piece on the Michigan prison system and talk to some real enlightened prisoners about what's really going on! I hope that we can keep in touch because when they decide to let me out I would be more than happy to tell it like it really is!!

I am sending this letter to call your attention to a situation now occurring in XXX facility in New York. The administration do what they want here and there is mad racism going on with prisoner and staff. And there is nothing being done about it. The papers up here and the white papers in New York City ignore the problem and never print a word. I'm hoping that your paper can send some reporters here to see for themselves the drastically overcrowded conditions, and the racism which permeates the jail. You simply would not believe the way this place is run...

You really have to see this place for yourselves to believe everything which is going on. I hope you can send someone soon.