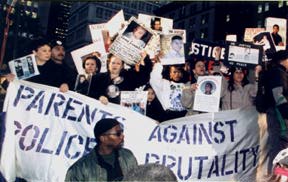 The crowd was packed tight, listening intensely in front of New York's city hall. Parents and relatives of those murdered by police rose to speak--and their words touched deep with stories of heartbreak and determination.

Margarita Rosario told how her life had changed: "When Anthony Rosario was killed they took part of my life away from me. I decided to start fighting until I die.... This is a very serious cause. Police brutality must stop and if I have to die for it, I will die."

Milta Calderon described the police murder of Aníbal Carrasquillo: "They had shot him in the back. My son was not armed. He was on his way home...I went to the district attorney, Charles Hynes, every week because I said I cannot lay down and grieve because this time I need to fight. I need to speak up for my son. Wake up everyone. You might get that knock on the door and your life will never be the same."

One after another, speakers from over a dozen families opened their hearts.

They had fought to be there at City Hall on October 22--going toe-to-toe with New York's hated Mayor "Adolf" Giuliani in the press, in the courts and in the streets. This wannabe dictator--who unleashed the New York cops in a heightened epidemic of brutalization and harassment -- had tried to silence the resistance by denying a march permit. And he had failed.

On October 22, it was a march filled with celebratory defiance from Union Square down Broadway--taking the street. On Monday night, the city authorities brutally attacked the memorial for murdered student Matthew Shepard. They have routinely tried to deny government opponents the right to march. But on October 22, faced by outrage throughout the city, they lost a round. Backed by a growing national MOVEMENT--by the power, support and organization of people from many nationalities and walks-of-life--here were the families of those brutalized by police, speaking hidden truths about official brutality in front of City Hall itself--surrounded by 3,000, a sea of signs and people wearing black.

October 22 was a wonderful day, a powerful statement. It was the third national protest of a growing and important resistance movement

October 22, 1998, National Day of Protest to Stop Police Brutality, Repression and the Criminalization of a Generation--Across the United States, thousands and thousands of people stood together wearing black--manifesting in schools, in workplaces and in the streets of more than 50 cities and towns.

As we go to press, the reports are still coming in--and many more places will be heard from over the coming week.

In several places, the authorities tried to silence the people. In New York City it was the attempted denial of a permit. In Los Angeles, the morning of October 22, the police staged a sweep through the Nickerson Gardens housing projects of Watts an hour before people gathered for the march--stopping and handcuffing organizers for the Day. In Chicago's Cabrini Green, police descended on the young men and women waiting for the busses, ordering them to their knees, frisking and insulting them one after the other for almost an hour--ordering them to disperse and announcing that it was "dangerous" and not-allowed for people like them to gather in one place. Police attacked an October 22 benefit concert at Club Soda in Washington DC and concertgoers sat down in the street and read out loud from the Stolen Lives book. Fifteen people were arrested in San Diego.

But police actions did not--could not--stop the message of October 22 from going out across the U.S. Everywhere, people from the ghettos and housing projects dared to hook up and speak out. And the brutal police attack on the Matthew Shepard memorial in New York, right on the eve of October 22, made many people even more determined to act and forge new unities in the face of the police.

The Stolen Lives Project (SLP) announced in East Coast and West Coast press conferences that they now have over 1,000 names of documented police killings. The stories of these stolen lives are being brought into the light of day. And their names were read out loud at rallies, emblazoned on posters and banners and sashes, across the country on October 22.

The media blackout was punctured, over and over again this year, during the weeks before October 22. All across the U.S., people were startled to suddenly see poets, musicians, actors, families of police victims appearing in Public Service Announcements (PSAs) on their TVs, promoting October 22 and the Stolen Lives Project. The National Day of Protest broke through to the evening news in more than a dozen cities. Coverage ran on CNN news and national Spanish-language networks.

In the Streets, On the Day

In Los Angeles, 1,600 people rolled through the streets of downtown on October 22, joined by people stepping off the sidewalks. In front were 30 Aztec dancers, followed by a float with portraits of people murdered by police. The names of the Stolen Lives were called as the marching crowd answered "Presente" for each of the dead. A sea of black, a common purpose, a powerful statement. Our RW reporter wrote: "One of the highlights of the march was the contingent organized by the Watts Committee Against Police Brutality. They chanted to the driving beat of a drum corps made up of almost two dozen children from the projects and members of the band Ozomatli and other musicians." The march went straight to the front doors of the LAPD's infamous "Glass House" headquarters.

For the third year in a row, the San Francisco march started just a few blocks from the spot where Mark Garcia was pepper-sprayed to death by police in the Mission District and headed for the Civic Center downtown. Dozens of family members of people killed by police brought their determination and heart to the 900 participants during the Day. Youth volunteers formed an honor guard, presenting the family members with flowers and ensuring their ability to march safely.

Five hundred rallied and marched in downtown Chicago--their voices and stories echoing powerfully among the tall towers, as a posse of young bucket-drummers led the way.

In Houston, October 22 arrived three days after a local grand jury refused to charge the six cops who broke into the home of Pedro Oregón without a warrant and shot him nine times in the back. Only one cop faces a criminal charge, for trespass--reminding people of the $1 fine given to police for the murder of José Campos Torres in 1977. The mood has been angry among the people: 500 people rallied in downtown Houston and many marched right on up to the main police station.

In Seattle, 250 gathered and wound through the downtown, with clattering police choppers overhead. "Police killing by the hour--what do we say?--Fight the Power!" In Philadelphia 200 youth marched from Love Park through Center City, stopped traffic and ended at the offices of the notorious Lynn Abraham--the District Attorney deeply involved in the persecution of political prisoner Mumia Abu-Jamal. In Boston, 150 people rallied at the Commons for a spirited march through the downtown. In Cleveland, 150 also came out, including Steven House who came on crutches from a brutal police beating only days before. In Waikiki, Hawaii, 110 people marched to the police station.

October 22 was a day of the youth--the students, the brothers and sisters of street organizations, the punks and anti-racist skins, the brave "shorties" from the housing projects, the Revolutionary Communist Youth Brigaders, the activists of Anti-Racist Action and the Refuse & Resist! Youth Network. It was a wild mix of cultures and nationalities--a serious coming-together-in-unity that was truly soul-stirring. Over and over, in city after city, people thought (to themselves and often out loud)--if we can do this for one day, if we can stand together in a movement like this against the system and the cops--then just THINK what we can accomplish.

October 22 was a day of allies, of new partners and inspiring support - of many different forces, groups, religions and trends. Many prominent people endorsed the call for October 22--artists, political prisoners, community leaders and politicians--including Ossie Davis, Ed Asner, Eric Stoltz, Cornel West, Geronimo ji Jaga, Michigan Congressman John Conyers, and Leonard Peltier. Rodney King came out to the Stolen Lives press conference in Los Angeles. Amnesty International issued a major report documenting police abuse and cover-up in the U.S. and Amnesty International supporters spoke out from the podium of October 22nd events in San Francisco and Seattle. The struggle for the permit in New York brought out powerful teams of lawyers to offer support, and at an important moment, a statement of support from the former Mayor David Dinkins.

On October 22, there were new stirrings in the belly of the beast. The power structure and its enforcers were called out, and in several cities stood quite exposed. On October 22, it was the police and those powerful forces they "serve and protect" who were the targets. The people have created a movement to drag great injustices out of the shadows into the light of day--to tear down the cover-ups and blue walls of silence. This has given the oppressed a new place to stand and speak. It has helped people find new comrades and allies. It is striking a powerful blow for justice.

Next week's RW will contain more coverage.
Check out the website of the October 22nd Coalition
at www.unstoppable.com/22