Why do people come here from all over the world?

From Ike to Mao and Beyond 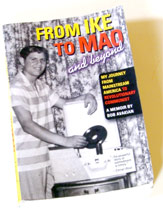 Subscribe to the podcast to automatically get new excerpts as they are released.

Help with downloading the files and burning CDs.