Bastion of Enlightenment… or Enforcer for Imperialism:

The Case of ISRAEL

by Bob Avakian, Chairman of the Revolutionary Communist Party, USA

More on the "Two Historically Outmodeds"

This leads me to the question of World War 3. A number of pundits and "analysts"—including once again right-wing squawking heads like Glenn Beck—have continued to insist: "This is World War 3, we are already in World War 3." This specter of World War 3 involves, in a real sense, both considerable distortion of reality and actual reality. And this does get to the "two historically outmodeds" and how in fact they do reinforce each other even while opposing each other.

The state of Israel has functioned as a military bastion to defend and extend U.S. domination over the strategic area of the Middle East and worldwide—in the context of establishing U.S. supremacy over other imperialist powers. Israel is by far the largest recipient of U.S. support: in outright grants, military sales, and economic support. 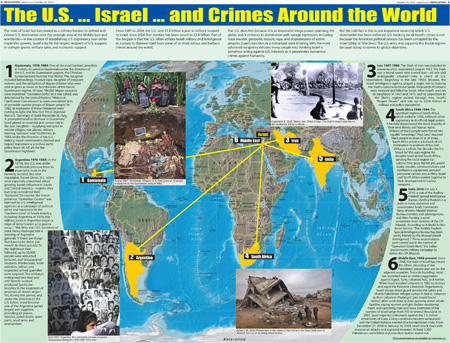 Drumbeat for Israeli Attack on Iran Grows Louder by the Day

There has been in recent months a drumbeat for a military strike by Israel on Iran, supposedly to prevent Iran from gaining nuclear weapons. It is said that Iran is in a feverish race to obtain such weapons; that if they get these weapons it will threaten the very existence of Israel; and that if necessary a military attack must be launched to prevent this.

An Interview with Cindy and Craig Corrie

"…When that explosive detonated yesterday it broke all the windows in the family's house. I was in the process of being served tea and playing with the two small babies.
"I'm having a hard time right now. Just feel sick to my stomach from being doted on very sweetly, by people who are facing doom. I know that from the United States it all sounds like hyperbole. A lot of the time the kindness of the people here, coupled with the willful destruction of their lives, makes it seem unreal to me. I can't believe that something like this can happen in the world without a bigger outcry…"

U.S. to Israel after the Gaza ship massacre: keep up the killing

October 4, 2010. A World to Win News Service. "The circumstances of the killing of at least six of the passengers were consistent with an extra-legal, arbitrary and summary execution," a UN-sponsored fact-finding mission on the Israeli attack on an aid flotilla to Gaza last May has concluded.

UN Report: What Happened on the Mavi Marmara

Initial attempt to board the Mavi Marmara from the sea

112. Israeli zodiac boats made a first attempt to board the Mavi Marmara from the sea shortly before 0430 hours. Several zodiac boats approached the ship at the stern from both the port and starboard sides. The approach was accompanied by the firing of non-lethal weaponry onto the ship, including smoke and stun grenades, tear gas and paintballs. Plastic bullets may also have been used at this stage: however, despite some claims that live ammunition was also fired from the zodiac boats, the Mission is not satisfied that this was the case. The smoke and tear gas were not effective due to the strong sea breeze and later due to the downdraft from helicopters.

The "Jewish boat to Gaza": How Israel Deals with Jews Who Consider Oppression Immoral

October 4, 2010. A World to Win News Service. Israel couldn't deal with the Irene the same way it had the Mavi Marmara. Unlike last May, when Israeli commandos killed nine Turkish passengers on an aid ship bound for Gaza, they had to be more careful with this small yacht carrying a symbolic cargo of medical and school supplies and therapeutic toys for Gaza intercepted September 28.

Revolution Responds to Question on Nature of Holocaust

Revolution received the following letter from a reader:

I thought your special issue on Israel was very good. I got a lot out of how you situated the stages of the development of Zionism and Israel in relation to what was going on with the imperialist powers at any given time. But it strikes me that the Holocaust is a very complex phenomenon, demanding more explanation than you gave it in the article. Could you respond?