The Science of Evolution and The Myth of Creationism

Knowing What’s Real—and Why it Matters
by Ardea Skybreak

Statements in praise of the book 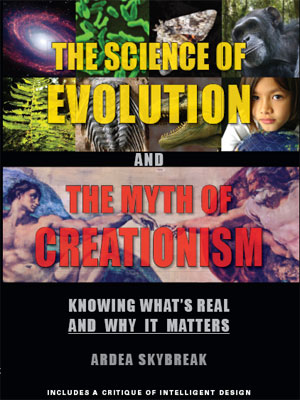 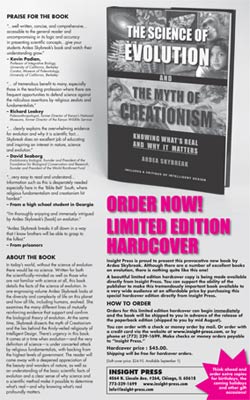 In today's world, without the science of evolution there would be no science. Written for both the scientifically-minded as well as those who are not familiar with science at all, this book details the facts of the science of evolution. In one engrossing volume Ardea Skybreak looks at the diversity and complexity of life on this planet and how all life, including humans, evolved. She examines the many different lines of mutually reinforcing evidence that support and confirm the biological theory of evolution. At the same time, Skybreak dissects the myth of Creationism and the lies behind the thinly-veiled religiosity of Intelligent Design. There's urgency in this book. It comes at a time when evolution–and the very definition of science–is under concerted attack by religious fundamentalists, with backing from the highest levels of government. The reader will come away with a deepened appreciation of the beauty and wonders of nature, as well as an understanding of the basic scientific facts of evolution and a clear sense of why science and a scientific method make it possible to determine what's real–and why knowing what's real profoundly matters.